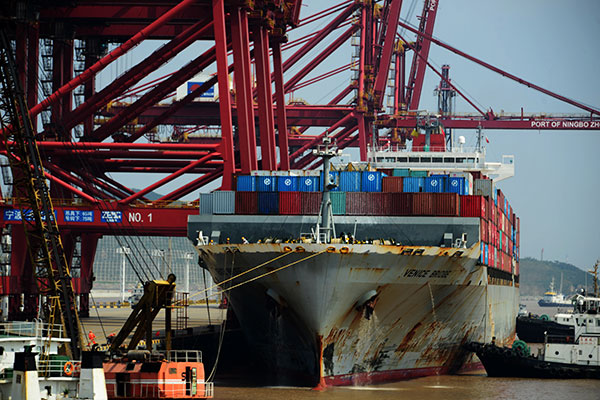 Port integration moves have gathered momentum in Zhejiang province with a key facility extending the suspension of trading in its shares in Shanghai on Tuesday, sources said on Wednesday.
The move, seen as a precursor to Zhejiang's renewed focus on developing its maritime economy, will see Ningbo Port Co and the Zhoushan Port, the two largest ports in the province, being integrated under a common umbrella.
Ningbo Port halted trading of its shares in Shanghai on Aug 4, said a report published in Caixin.com, adding that the move is an indication of the large-scale port integration that is happening in the province. Zhejiang plans to integrate all its port-related resources in the province and manage them under a unified company, Zhejiang Ocean Portal Investment Operation Group, according to Caixin.
The Caixin report said that the province plans to bring its five main ports - Ningbo, Zhoushan, Jiaxing, Taizhou and Wenzhou - under the unified company.
According to available data from the Zhejiang Provincial Administration of Industry and Commerce, the unified company was registered on Aug 21 in Zhoushan. The Zhejiang branch of the State-owned Assets Supervision and Administration Commission is the sole shareholder of the firm.
While no one from the Zhejiang Ocean Portal or the individual ports has confirmed the news yet, experts said the integration, if realized, will improve the operational efficiency of the ports in Zhejiang province.
Nie Xianzhong, a researcher with the Zhejiang Academy of Social Sciences, said that the integration is an opportunity for the province to develop a sustainable port economy.
"There is already fierce competition between the Ningbo and Zhoushan ports. However, neither of the two are strong enough on their own to compete with others in China," he said. "Although the annual cargo throughput of Ningbo-Zhoushan ports has become the largest in the world, they are still far behind other international ports like Singapore, Busan in South Korea and Shanghai."
In 2014, cargo throughput at the Ningbo and Zhoushan ports reached 873.47 million metric tons, ranking No 1 in the world. However, container throughput, which is considered as a more important index to evaluate a port, was 215 million standard containers, pushing it to the fifth position.
Combining the operations of Ningbo and Zhoushan ports has been on the agenda of the Zhejiang provincial government for almost a decade. The current plan, however, hinges more on combining the throughput figures. The two ports are still operated by two different companies.