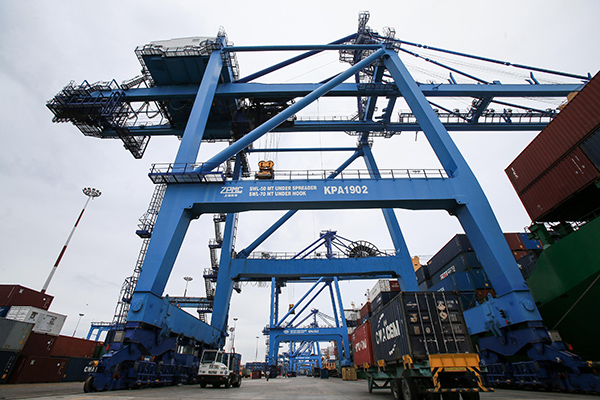 The China Council for the Promotion of International Trade will release an export market guideline by the end of this month to assist the country's foreign trade, especially in emerging markets such as Latin America and Africa, officials said on Wednesday.
"The guideline will help Chinese manufacturers get a better knowledge of global markets from developed economies to developing markets. Market demand, and the political, legal and business environments will all be included to help them prevent risks, and help them invest in new market destinations," said Lin Shunjie, director-general of department of trade and investment promotion at the CCPIT.
Lin's comments came after China's foreign trade volume reached $3.96 trillion in 2015, down 8 percent year-on-year, the government announced on Tuesday. The country is also confronting trade protectionism with trade remedy measures against Chinese products rising significantly last year, especially from developed economies in the European Union and the United States.
Lin said the agency will further lift the level of commercial legal services. The CCPIT will build a "big legal" service system to improve commercial legal work abroad and establish commercial legal work agencies in key industries and countries, including the US, Brazil and India, as well as building China into an international arbitration center.
Ge Xiangyang, an investment lawyer at Beijing office of the Hong Kong-based global law firm Mayer Brown JSM, said unlike in mature markets such as Germany or the United Kingdom, conducting merger and acquisition activities in Latin American or African countries may cause bigger risks, as many Chinese companies are not familiar with the local legal and commercial environment and profitability models.
The firm has completed more than 12 large-scale outbound deals in the fields of energy, mining and infrastructure for Chinese companies including CITIC Group, China National Offshore Oil Corp and China Minmetals Corp in both Africa and Latin America over the past decade.
To protect their tax revenue, many countries in Africa and Latin America do not acknowledge the legal status of companies registered in the Cayman Islands, and tribal rights and influence remain powerful in many African countries such as Ghana, Nigeria or Benin, which have caused difficulties for Chinese companies to invest in these destinations.
Other challenges include a limited capacity to organize and coordinate commercial, legal, financial and human resource diligence.
"It is also important to carry out international financing business to diversify market channels, instead of relying overwhelmingly on domestic policy banks such as China Development Bank and the Export-Import Bank of China," said Ge.
Dai Guanchun, a partner at Jingtian & Gongcheng Attorneys at Law, another Beijing-headquartered law firm, said because of different languages and mindsets across these regional markets, reliable advice and authentic information from local financial and legal professionals are of paramount importance for overseas companies doing business in Africa and Latin America.
"Chinese companies already have a high chance of securing contracts for infrastructure and industrial projects as they enjoy the support of financial institutions such as the Asian Infrastructure Investment Bank and the Silk Road Fund, as well as governmental agreements. They should boost their chances even further by relying on experienced legal brains," said Dai.