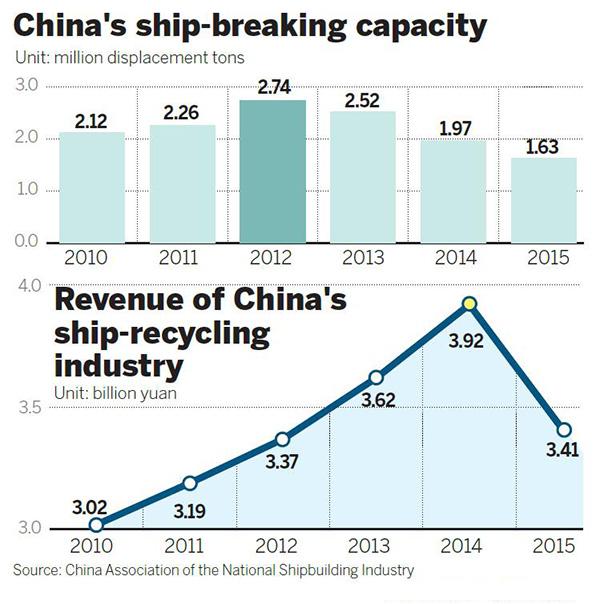 China's ship-recycling industry is under mounting pressure from ongoing low steel prices and the increasing costs of adopting "greener" vessel-breaking methods, according to senior industry officials.
The latest figures show ship-recycling revenue dropped 15 percent to 3.4 billion yuan ($519 million) in China last year.
But labor and environmental protection costs soared, and the price of scrap plummeted－a double-whammy which Wu Jun, vice-president of the China National Ship-recycling Association, said is putting many firms under threat.
Recycled ship parts provide raw materials for infrastructure and capital projects in a number of sectors such as hydropower, bridge and railway construction at home and in other developing economies.
The process starts when scrap-yard owners buy ships from owners.
Last year was the fourth consecutive year that the industry has suffered financial losses.
The association's findings showed ship-recycling companies in China signed contracts with both domestic and foreign shipowners to dismantle 1.63 million displacement tons (or 6.84 million dead weight tons) of scrap vessels in 2015, a 28.7 percent fall on the previous year.
The price of scrap steel was expected to fetch between 1,043 yuan and 1,327 yuan per ton in China in 2015.
The price, however, has dropped to between 900 yuan and 1,000 yuan, as supply and demand fell in many sectors such as automobiles, railway equipment and other manufacturing industries, which provide and use large quantities of scrap.
China's ship-recycling yards are mainly located in Zhejiang, Jiangsu, Shandong and Guangdong provinces, collectively employing around 120,000 workers, and jobs are now also under threat.
The dropping scrap prices have seen firms storing supplies in increasing amounts, rather than offloading it cheaply to steel plants, said Wu.
Affected by low commodity and crude oil prices, the association said the number of bulk vessel and offshore oil rigs actually being dismantled has grown more than 30 percent in the past year, adding to the oversupply in underpriced scrap.
Commenting on the situation, Zhang Yongfeng, deputy director of the market research office of the Shanghai International Shipping Institute, suggested the government should consider offering more encouraging policies, such as tax cuts or financial help to those buying steel-cutting equipment or materials.