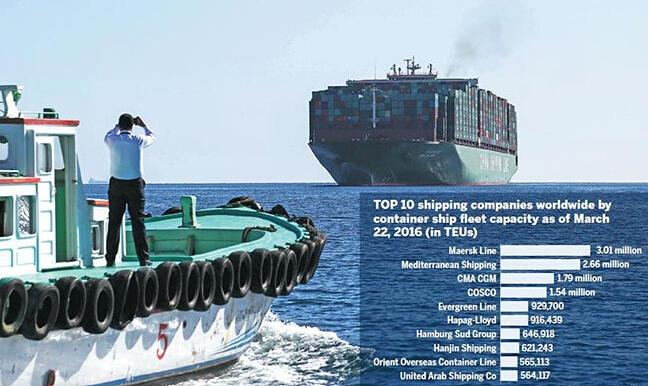 China COSCO Shipping Corp Ltd and three partners, including France's CMA CGM SA, on Wednesday announced a new shipping partnership, OCEAN Alliance, formed to challenge 2M－the world's largest container carrier alliance.
Formed by Denmark's Maersk Line and Switzerland's Mediterranean Shipping Co SA, 2M started its operations in 2015, and controls more than 2.1 million twenty-foot equivalent units, and manages more than 200 vessels.
Other members of the new COSCO alliance are Taiwan-based Evergreen Line and Hong Kong's Orient Overseas Container Line.
The alliance will bring service reliability and integration of the latest vessels in a fleet of more than 350 container ships. The deployment will initially cover more than 40 services globally, mostly connected with Asia.
Alphaliner, a French maritime research firm, estimated the OCEAN Alliance will have around a 30 percent share of the global container shipping market, similar to the market share owned by 2M especially on the Asia-Europe and Pacific routes.
Subject to regulatory approval by competent authorities, the new alliance plans to begin operations in April 2017. The initial period of the alliance will be five years.
OCEAN Alliance will enable each member to offer competitive products and comprehensive service networks covering the Asia-Europe, Asia-Mediterranean, Asia-Red Sea, Asia-Middle East, trans-Pacific, Asia-North America East Coast, and trans-Atlantic routes, the member carriers said in a joint statement.
Further details about OCEAN Alliance and the transition plans for the four member lines will be communicated to stakeholders and the market in due course, said the statement.
Alliance members will also share coordinated sailing schedules, commercial information and land-based logistics networks which can help cut costs.